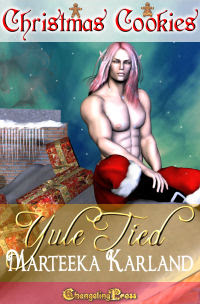 Ilyia has worked for Da’Main and Son Shipping on the planet Solum for over a year. During that time, she has admired the handsome and sexy as sin “Son”. While she thinks him totally fuckable, she’s a little leery of the rumors she’s heard about his sexual play. Specifically, she doesn’t like the idea of being bound and helpless before any man, including the hunky Dalion De’Main.

Dalion could give a damn if Ilyia is tied and helpless beneath him, as long as she’s beneath him -- or over him, or beside him -- but he has a feeling the voluptuous vixen protests bondage just a little too much for it to be believable.
Oh well. It’s a dirty job, but someone has to do it…

I enjoyed the complete other world that was created for this short story. The titles and descriptions of other-worldly things and places were very well done. I also enjoyed how the author used expressions to further immerse me into this world.
I was convinced early on through Da’Main’s thought process that he sees Ilyia as much more than the pleasure they could share together. I liked that it was a priority to both Da’Main and the author to bring that across to the reader and not just make it about the sex.

The sex was hot, but parts were also much more tender than I thought they would be, based on the title and description. It added nice depth to the story and to their relationship.