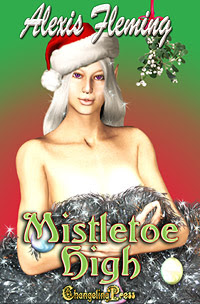 What’s the world coming to when a girl can get arrested for dealing mistletoe, aka happy juice?

When Christmas is declared illegal, Misty Toll finds herself dealing mistletoe to fund Santa’s revolution to bring back Christmas. Except Santa’s taking too much of his own product, Rudolph’s red nose turns out to be an excess of vodka, and there’s a bunch of rabid revolutionary elves on the run. Now she has the added problem of Zane Mason, the new man hired to work on the deer farm where she’s hiding Santa’s reindeer and where her secret stash of mistletoe grows.

The very first pages had me giggling out loud with the absolutely outlandish situations, particularly the way that Misty and Zane are introduced… by a very drunk and disorderly Rudolph the Red-nosed reindeer. Who can blame the poor dear (yes, pun intended) as he and all Santa’s reindeer have been outlawed and are fugitives, so he hits the sauce. The fact that Christmas has been outlawed, and anything associated with it as well, just adds to the opportunities for hilarity. The hilarity just continues at a steady pace from that point on.

I love Misty and Zane. They were an entertaining couple that really had me rooting for them, even though they are on opposite sides of the law. I mean, come on, he’s been sent to infiltrate her “operation” and get enough evidence to bring her down and send her gorgeous butt to jail. Misty, a half-elf, having taken on all the responsibility of caring for the out of work elves who can no longer make toys, and the still that makes the contraband Mistletoe Juice and organizing Santa’s runs of the illegal substance, is guilty as sin.

Zane still can’t get enough of her. Misty and Zane both fall fast for each other, although it starts out as a purely physical response on his part… at least that’s what he tells himself. Misty gives him her all before she realizes exactly who he is.

This was a very entertaining ride through an alternate world, where elves are common knowledge, (you even know exactly how to spot them), Santa and his reindeer are fugitives from the law, and a rebellion is in the making; a rebellion that will hopefully bring back Christmas. We are fed acronyms for federal agencies that bring a snicker to the fore, if not an outright guffaw.

I think the absolute best part of this story, aside from the love story, was the supporting cast of characters. Talk about riotous, ridiculously funny situations mixed with, or caused by, an engaging and hysterical secondary cast. Mama Mini is just one of the mob. She says she’s the housekeeper, and everyone knows she is militant about her home, her Misty and anything else she feels is her domain. Basically, she’s a drill sergeant with pointy ears, green hair and a roly-poly figure. Add to that a reindeer who needs to sign up for Alcoholics Anonymous, a Santa who can’t seem to avoid helping himself to the product, and a band of rabid, militant revolutionaries, and the stage is set for insane yet side-splitting adventures in bootlegging.

The sex was HOT, HOT, HOT. I was highly amused and aroused by the writer’s creativity and grasp of the sex scenes. There was one scene that sticks in my head… it was definitely one of the most erotic, inventive and playful quad ride I have ever read. You can get a quad (four wheeler/ATV) ride anywhere, but Ms. Fleming’s take on this one had me hot under the collar and breathing heavily before it was finished. Whew, way to go! This is a definite plus recommend on my part, and I would recommend it to anyone needing a comical holiday read that has a very satisfying end where our reluctant hero redeems himself.

Reviewed by Viscaria
Posted by The Long and the Short of It Reviews at 4:19 AM
Email ThisBlogThis!Share to TwitterShare to FacebookShare to Pinterest
Labels: Author D-G, Changeling Press, Christmas, Four Cherries, Holiday, M/F, Sci-Fi/Fantasy, Short Story

Wow! I just found this review for Mistletoe High and wanted to thank you. What a fantastic review. I am so glad you enjoyed it.