Review: Dance With Me, My Lovely 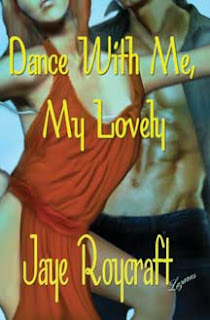 Dance With Me, My Lovely
by Jaye Roycraft

Cate Greenbush knows that a strip club isn’t the way to meet men, but when your job is talking to dead people, boyfriends are hard to come by. She also knows that the sexy headliner of tonight’s show is nothing more than a fantasy, and a dangerous one at that. During the performance she sees an image of a dead woman and a shadowy figure she fears is her killer, the dancer.

Vampire Garran Lux has no such lack of sexuality, and his public persona flaunts it to the world. During the week he’s an instructor at a dance studio, and on Fridays he headlines as an exotic dancer. But it’s a double life he leads, for his private life is one of secrecy and loneliness as one of the undead. Still, he’s been very successful at maintaining the balance in his existence.

For some reason, the beast that rules his vampiric side is becoming stronger and harder to control. Without the control of his “human” side, he fears he’ll start killing again, and being reckless is no way to survive immortality.

Cate is an urban shaman who specializes in spiritual healing and soul retrievals. She’s shocked to find that her seven o’clock appointment is her fantasy lover from the strip club. But the young man insists he needs her help to repair his life, though he doesn’t explain the past tragedies that have led to the splintering of his soul. She agrees to help him, in spite of her fear that he may be a killer.

The quest for Garran’s lost soul becomes an exploration of human desire and inhuman lust. In the end the search is for love, if only Cate and Garran can survive the perilous journey to the Land of the Dead.

I really enjoyed that the story was written from both characters point of view, it made it interesting to see how each was feeling at the exact same time. I really liked the idea of showing how Cate and Garran’s past experiences with love and sex. It gave you a look into why they are the way they are now. Cate does not know that Garran is a vampire when she first sets eyes on the hunky dancer at the strip club. She feels an intense connection with him that scares her. A woman’s spirit comes to her in glimpses while staring up at the dancer. She then wants nothing to do with him as she feels he could be a killer.

Garran later finds himself feeling lost and is looking for that piece of him that he is unsure will ever be found – his soul. He appears at Cate’s door looking for her spiritual help in the long journey to the Land of the Dead to reclaim his lost soul. She does not realize that he is a vampire at first, even with their first journey to the other world, nor even after their first romp together on the floor after coming back from the Land of the Dead together.

I have never read anything with a Shaman in it and reading the descriptive passages of how a Shaman’s journey actually works was very intriguing, especially when a vampire is involved. And then to add the intense sex scene at the end of that first journey made it all the more exciting.

The course of Cate and Garran’s relationship was a very different journey – one that brings them to the edge of death searching for a lost soul together. If that can’t bring two people together than what can? Trust is a big theme in the story as well. Both characters needing to be open, honest and share with each other so that they can trust enough to get through their issues.

Can a vampire truly get his soul back and fall in love with a human?

Review by Snowdrop
Posted by The Long and the Short of It Reviews at 7:29 PM
Email ThisBlogThis!Share to TwitterShare to FacebookShare to Pinterest
Labels: Author O-R, Contemp, Four Cherries, Full length, ImaJinn Books, M/F, Paranormal