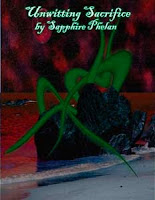 Lisa Selvey moved to Necro Bay, just on the outskirts of Chesapeake, Virginia. She moved there because of its reputation for peace and quiet. To free herself of her nightmares. But her nightmares were just beginning. . . Necro Bay was just your average American seaside town. The house she bought a normal home. The handsome man, Jacob Lindan that she met, nothing more than a sexually attractive man that whose touch made her mad with desire. Things nightmarishly changed and made her wonder if she wasn't going mad. Even worse, it made her wonder if something lurked in the shadows.

Ever wonder if the stuff of dreams could be real? What if those creepy crawlies that hid under the bed when you were a child are real? And what if there’s a twist of romance within the scariness? Then you’d have the story of Lisa and Jacob in Unwitting Sacrifice.

Lisa sees tentacled creatures but thinks she’s hallucinating. The tentacled critters are real and want her as their next queen. The imagination used to write this story is fabulous.

There are times when the uniting between Lisa and Jacob is tender. It’s passionate. Then again, there are times that the squeamish reader may find objectionable. This isn’t a read you want if you want a breezy story. You have to concentrate to keep the scenes straight. At one point there is a character that seems almost totally out of place in the story and it takes a couple of reads to figure out how it all fits together.

While you can feel the quiet passion between them, it seems through most of the story the romance is lacking. Jacob wants Lisa because she can see him. She doesn’t understand, but she can see him. I like the scenes when he comes to her in his human form. The scenes are written with tenderness and love. But with that said, there are moments where the love and the romance feel forced and stilted. At times I wasn’t sure Lisa wanted to be in the same room with Jacob.

Sapphire Phelan writes an intriguing and very unique story. If you want a sci-fi tale to fill a cool night, then you need to read Unwitting Sacrifice, but be warned. Once you start it, you can’t put it down. I give this story 3.5 cherries.

Posted by The Long and the Short of It Admin at 4:00 AM
Email ThisBlogThis!Share to TwitterShare to FacebookShare to Pinterest
Labels: Author O-R, Contemp, Horror, M/F, Paranormal, Short Story, Three Cherries, Under the Moon, Voyeurism