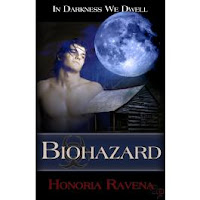 Hunted by his people, the shapeshifter, Jayden, sheds his human skin after escaping his execution. 200 years later he’s still on the run. When he’s attacked in the remote woods in Wyoming, the last thing he expects is to be saved by a human woman.

When Maura finds a rough looking group of men hunting a tiger in her forest, she doesn’t hesitate to pull a gun on them and release the animal. What she doesn’t expect is for that frightening cat to change into a gorgeous, surly man with a tortured past.

But when his people threaten her life, will he save her, or leave her to the wolves?

Don’t look a gift horse in the mouth... the horse might bite back. Or in this case, the tiger will rip you to shreds. Sound scary? Interesting? Then you need to read Biohazard to get the whole story.

I like a good fantasy story. This one starts off with lots of action and barely gives you a chance to breathe. Although I wanted to see more of the world that Jayden and Maura live in, you still feel like you’re there. You watch the passion and the desire blossom between them, even when they aren’t sure of anything other than the lust growing between them.

Jayden is a unique hero. He’s carrying a disease and doesn’t want to spread it, but once he sees Maura—all bets are off. He’s gotta have her. As a reader, I would’ve loved to have a man want me with the same dogged determination. It’s really sexy. There were a couple of times when he came off a tad odd, but it didn’t take away from the story.

Maura is a fun heroine, but at times, she got a bit irritating. I understand her fear of taking in a tiger and then he turns into a man—a hot man. But she does a lot of blushing and shying away. The reader can identify with her fear to leave herself bare to him, because in her past, she’s been hurt. That said, I wanted to see her sport the same amount of backbone as she does early on in the story. I wanted her to be the strong woman she comes off as in the beginning. Still, the sex sizzles and you’ll find yourself lost to their passion.

If you want a story that will leave your fingers burned, then you need to read Biohazard. I give this story 4 cherries.

Posted by The Long and the Short of It Admin at 4:06 AM
Email ThisBlogThis!Share to TwitterShare to FacebookShare to Pinterest
Labels: action/adventure, Author O-R, Breathless Press, Four Cherries, M/F, Paranormal, Sci-Fi/Fantasy, Short Story, Voyeurism