The Scarab Prince by Rebecca Goings 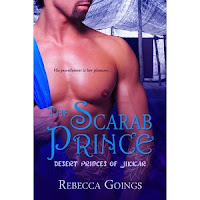 Trianna Pramtash must be punished for her assault on the Viper Prince’s intended bride. Not wishing to do so himself, the Viper gives her to his best friend, the Scarab Prince, to mete out her sentence--the one man who’s held Trianna’s heart since childhood.

Qadir Hadmas is overjoyed Trianna no longer belongs to the Viper. His heart broke years ago when she left Suridesh engaged to his best friend--but she never married Tariq. She belongs to him now, and he’s not about to let her go.

Neither of them is prepared for the sensual delights Trianna’s punishments turn out to be. Their fragile childhood bond turns into a raging inferno--one they cannot deny. But when Trianna is taken from him in a spectacular sandstorm, it is up to the Scarab Prince to claim the woman he has always wanted, and make her his in truth.

A childhood love turns to full blown passion as adults when Trianna and Qadir see each other for the first time after many years apart. Although they try to ignore their growing love, they can't deny the physical reactions when in each others presence. Qadir uses the opportunity he has gained as Trianna's new caravan prince to punish her in ways she's never experienced, only his punishment doesn't go as planned. Before Qadir knows it, he has become her prisoner of the heart.

Ms. Goings wrote a story full of passion between two people who had been childhood friends first, making the connection they feel as adults that much deeper. Their reunion is emotional and full of hope for a better future together, but obstacles lay in the way. It is one of the basic templates for a romance, yet Ms. Goings kept me interested by the circumstances and the world in which she built around them. The creative thought and and hard work to put this story into words is evidenced while reading and Ms. Goings should have those efforts acknowledged. The pages were literally flying past my eyes as I devoured this story. It was very hard to put it down and only when I reached the end did I find myself still not wanting to. I recommend starting with the first book in this series as I'm sure any Sci-Fi/Fantasy reader won't be disappointed and will be sure to make Ms. Goings an 'auto-buy' author.

Recommended reading for fans of being romantically submissive to the one you love.

Posted by The Long and the Short of It Admin at 4:03 AM
Email ThisBlogThis!Share to TwitterShare to FacebookShare to Pinterest
Labels: Author D-G, BestBookOfTheWeek, Carnal Passions, Five Cherries, Full length, M/F, Sci-Fi/Fantasy