The Jackal Prince by Rebecca Goings 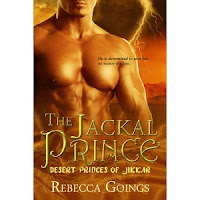 Yasmin is haunted by a malevolent spirit. She can hear its voice, feel its presence—and it wants her dead. Her only hope is the protection of the Jackal Prince, the very man she saved from death so long ago.

Siraj Pramtash is overjoyed when Yasmin asks for his protection. He’s been searching for her for years, ever since she healed his mortal wound as a child. He never forgot her striking beauty—or her lavender eyes. Now that she is a woman, Yasmin takes his breath away.

The spirit pursuing her rocks his caravan, but the Jackal will not be moved. In a desperate bid to keep her under his god’s protection, he marries her. But fate has much more in store for them than a mere demon from Kaldaeron.

When the truth is faced head-on, the Jackal’s faith in his god is shaken, yet he is determined to save his princess—or die trying.

“Where once there were six, now only five princes remained in the Golden Desert.”

One of those princes was the Jackal Prince, Siraj Pramtash. I had my first glimpse of the Jackal Prince when he was a child in the first book The Viper Prince and fell in love with the kindhearted boy who cared about the people around him and hated his father’s cruel ways. With each book in the Desert Princes series, I learned a little more about the boy and saw him grow into a man. I also met Yasmin as a child when she saved his life after he was run through with a sword.

In The Jackal Prince, Siraj is a grown man who comes face to face with the young woman who saved him from death, and who he believes is a gift from the Jackal god. As I watched the story unfold, I was eager to learn what evil was stalking Yasmin. Still young and innocent, she has never known a man’s touch, but she feels a connection to the Jackal Prince -- a bond that started that long ago day when she healed him with her magic. It is as if they have known each other their entire lives.

It's possible each book will stand alone, but I recommend starting at the beginning with book one where Ms. Goings has laid the groundwork for the world of Jikkar and the life, customs, and animals in this dry desert land. I think that if you do not start with book one you may miss out and not get the full enjoyment of the story line and the characters.

I have read many of Ms. Going’s books and have yet to find one that I did not like. She is a brilliant author with the ability to tell a vivid and detail story that will pull you in and make you feel like you are there through the whole tale. Yes, I felt the anxiety and the tension but I walked away in the end with a fabulous sensation and an attachment to the characters. The sex scenes are an added bonus and will heat the blood on these hot summer nights. I'm a fan.