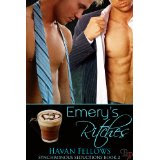 Ritchie won't admit that he's heartbroken. Emery won't accept less than all of Ritchie's affection. How will meticulous Emery win snarky Ritchie for his own?

Ritchie Lymings is wallowing in self-pity after seeing the man he loves—his best friend—reunited with his arch enemy. He's drowning his sorrows in coffee and caramel when an irritating stranger barges into his life, determined to make him smile. Even if this interloper is too dense to understand his faux pas, Ritchie figures he may be good for a quickie to get his mind off of his immediate situation. A simple round of love 'em and leave 'em sounds promising.

Emery Hutchins recognizes Ritchie immediately when he stops for his morning coffee and breakfast. His friend Ryder had been telling him stories about "the infuriating twit" for years. Fate and coincidence were two things that normally gave Emery cause for pause, but he couldn't let this opportunity pass him by. Unable to relinquish control to fate though, he immediately devises a plan to make the deliciously snarky Ritchie his own, one hundred percent completely.

But for these two diverse personalities there is one major problem. How can Ritchie's attitude and Emery's meticulousness blend together, or is this an oil and water mess?

Ritchie would be the first to tell you he’s no man’s second choice!

Sometimes it stinks to be a “friend” when who you really want to be is so much more than friends. As the saying goes “If you love something (or in Ritchie’s case, someone) set it free. If it comes back to you, it's yours. If it doesn't, it never was.” The “someone” who has been in Ritchie’s life and occupied his most vivid fantasies is his best friend, Harlan. Harlan loves Ritchie, but not “like that”. That love is reserved for Ritchie’s self-proclaimed nemesis, Ryder Halloway. But that’s another story – this novella brings the snarky, brooding Ritchie face-to-face with the man who doesn’t simply replace Har as the man of his dreams. Emery literally doesn’t give Ritchie a chance to tell him “No”.

Do you enjoy a good cat and mouse chase? If so, you are going to love the sheer effort and audacity of Emery when he sets his sites on Ritchie. Emery is charismatic and persistent but Ritchie doesn’t make it easy on him. That wouldn’t be much fun and it certainly wouldn’t fit Ritchie’s personality.

Speaking of Ritchie’s personality, bless his heart, he gives new meaning to putting ones foot in his mouth. He gets so wound up at a backyard BBQ, I just wanted to stuff a burger in his mouth so he’d stop talking.

For me, that’s just one element of a well written story. Does it make me want to engage with the characters? For Emery’s Ritches and just about everything else I’ve read by Ms. Fellows, the answer is a resounding “Yes!”.

There is so much “muchness” packed into this short story I couldn’t put it down before I finished it. Then, I was craving more because there is the little matter of Ritchie’s personal assistant, Geoff and a perfectly sweet bear who caught his attention. That’s going to be a fun story!