Loving the Valkyrie by Ellen Margret 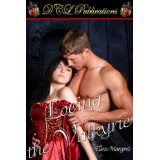 Brander took Gytha as his slave and loved her with passion. She, in turn, loved him. When he discovered she was to die, alongside his mother in a Viking burial, he cut her throat to spare her an agonising death. Imagine his astonishment when Gytha rose from her grave as a Valkyrie who craved sex. When Kyvelira gave an order, no mortal dared refuse for she bore the power of the gods. However, when that power was rescinded by Freya, Kyvelira was left vulnerable and weak. That was when she needed Brander the most.

Even a Valkyrie needs to learn a lesson or two about what makes a man fall in love with a woman. Not only that, but loving someone brings about a power that can’t be understood until the emotion is experienced for themselves. That’s the beauty of this little gem.

At first, I thought I’d met the heroine and in a way that’s true. But the author had a more magical mystical trick up her sleeve. Instead of a sweet lady, the true heroine is a brash, ungrateful and arrogant wench. No matter that she’s a Valkyrie, she had a horrible superiority complex and I found it hard to like her. Which was the point.

Kyvelira has a lot of experiencing and growing to do as a character. What the author chose as the venue for learning what humanity is all about was harsh, violent, cruel and, I suppose, true to the times. Makes me glad I’m a 21st Century gal.

The hero had already learned what true love was and I found it interesting that he learned his lesson well. That’s a good thing because Ms. Margret had him tested to the Nth degree. The old 1970s song, “The Things We Do for Love” certainly applies here. Except in the day and age that Brander lived, it’s not the ‘things’ so much as the pain we endure for love. The author created a very noble and strong man, not just in body but in mind as well. I’m referring to his moral compass. His mind and body isn’t so strong when it comes to sex. The poor hero didn’t stand a chance against Kyvelira. She had knowledge gained from where she came from that Brander had no experience in, so it was a ton of fun watching him being seduced by the very nature of the acts. After all, he was a very virile Viking.

Secondary characters are Brander’s family and the gods and goddesses of Valhalla. As with the Greek and Roman gods, Viking gods like to play with people like chess pieces too. I really liked that the author had even one of the goddesses learn a lesson too. No one is perfect, even a legendary god. It was a nice touch.

The villain was a nasty sort. The author created a very effective and convincing bad guy and he played his role well. As for his comeuppance, I wasn’t thrilled with the almost gentle way the author had him handled. I don’t think the fear was drilled into him enough nor was enough done to him. Sure there were demands made, but I felt that the punishment didn’t exactly fit the crime. Again, perhaps it was fitting because of the time in history, but I wasn’t impressed. I guess I’m a little bloodthirsty.

Loving the Valkyrie is a quick but entertaining read about love’s powerful yet humbling role in forging a strong relationship between two unlikely people. If a reader enjoys tales about Vikings and gods then this has a lot of elements to enjoy. If historical heroes of old are your thing, then Brander should appeal because he’s got a lot going for him. And if a nice happily ever after is a must have, this book has that too. It’s a great summer read and worth kicking back on the beach or deck and letting the words take you away to another time and place.

Posted by The Long and the Short of It Admin at 4:20 AM
Email ThisBlogThis!Share to TwitterShare to FacebookShare to Pinterest
Labels: Author L-N, DCL Publishing, four stars, Historical, M/F, Paranormal, Short Story

Magical and mystical sounds very good to me, ladies!