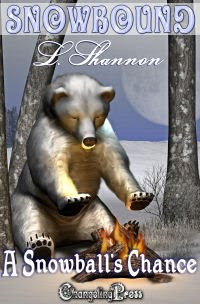 Trapped in an ice cave and nearly frozen to death, Josh’s only hope is the demon sent to claim his soul. But “Get Out of Hell Free” cards don’t come easy. To earn his, Josh will have to satisfy a fire demon’s insatiable lust.

Quick, hard and fiery. Three words that perfectly describe L. Shannon’s A Snowball’s Chance. Once started, turning away from the story was not an option. It’s a story that’s focused almost exclusively on a sexual encounter with a twist.

The ride was wild and satisfying. Perhaps the only thing I found perplexing was Josh’s almost too easy acceptance of Chance’s appearance, falling instead, directly into lust. Yet as the story drew me in, I found it easy to ignore this blip and eagerly followed the rapid-fire pace straight to its smile-worthy ending. Ms. Shannon did an excellent job with this steamy romp and both men will have you smiling as you wait to see who ends up the victor of their sexy fight.