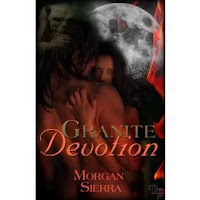 Two hundred years ago, Allyn du Sainte Dominique was cursed to a granite prison in the form of a gargoyle. It devastated his lover, the powerful witch, Helene Laurent.

The curse is a powerful one invoked by the goddess Helene worships, but with the universe in perfect alignment, Helene has a chance to free him. She'll do whatever it takes and use every ounce of her desire to change him back to the human she once knew. Will Helene's passion and her devotion be strong enough to break the ties that bind him?

Morgan Sierra’s book took turns I didn’t see coming, but man-oh-man was it scorching hot. I couldn’t begin to imagine what would happen if the object of my affection, nay devotion, was turned to granite right before my eyes. I’m pretty sure two thousand years would feel like an eternity as it did to Helene. Speaking of the heroine, she’s one tough woman. There were times she could’ve easily backed down and given in. Although the depths of her attraction to Allyn were more than I could conceive, it was very hot to read about.

And then there’s Allyn. This guy got the wrong end of the deal. Turned to stone because he fell in love. Actually, it’s rather romantic to think a guy would sacrifice himself for the love of his life. Even with the modifications, I have to say, he was one of the yummiest heroes I’ve come across in a while.

I love a good fantasy story, especially when there are plenty of plot twists to keep my attention. This book kept me in my seat. I wasn’t totally sure at times what was going on because it’s all told from the heroine’s point of view. But that’s not to say I didn’t enjoy it. The writing is crisp and the visuals were engaging. I wanted to know what would happen next. I will be looking for more from this author.

If you want a great little story that’s guaranteed to need a cool drink, then you need to read Granite Devotion. You won’t be disappointed.