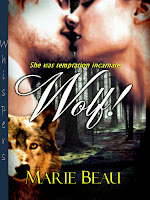 Lyssa Merrick is happy with her life leading wildlife and wilderness expeditions through the upper Adirondacks. She’s proud of the business she built on her own, and happy with the freedom to run whenever she feels the need.

Wolfe Reardon, as leader of his pack, wants to create a wildlife sanctuary to allow certain species to repopulate the area, as well as to provide a safer environment for his pack without fear of hunters.

When Wolfe walks into Wilderness Wanderings, he knows he’s met his mate. Lyssa, unfortunately, is not so happy to discover her destined mate is a wolf. Long ago she swore she would never be a member of a pack again and she’s sure nothing he says will change that.

Lead a hike into the Adirondacks to scout out some land for an animal preservation. Easy enough assignment for an experienced tracker and lynx shifter like Lyssa Merrick. So what if the client is sex on legs. So what if he smells good enough to jump. So what if…he’s a wolf shifter and her mate? Okay, not so typical a job after all.

Lyssa Merrick has purposely lived as far away as possible from her family and pack ever since she was made to feel an outsider. Who could blame her, really? She was a lynx living in a wolf pack. Her mother was the only other lynx she knew and was married to Lyssa’s father who is Alpha of the pack. You can imagine how Lyssa felt the need to prove that she was able to take care of herself but being separated from the pack has started to take its toll when in walks the totally delicious and breath stealing Alpha Wolfe Reardon.

Ms. Beau has a beautiful way with words. That first meeting is so full of tension my eReader started to fog over. She describes how Lyssa reacts to realizing that the man in front of her is not only a wolf but her destined mate and I think my heart was beating just as loud as Lyssa’s when he touches her hand and her face. In the past I’ve tended to lean towards only reading wolf shifter books but the cats are starting to get to me. I could literally imagine the way my own housecat reacts when we stroke her head or rub her back. Ms. Beau describes Lyssa’s reaction as one of confusion of whether she should claw, bite or purr and that is definitely true to a cats nature.

Wolfe is exactly the type of alpha character you would hope and expect in a shifter book. He is determined and self-confident when suddenly faced with his mate. He’s also protective and fearless when even the slightest hint of harm comes near her. In a word, Wolfe is fierce!

Wolf! was a terrific little novella and I wouldn’t mind revisiting this pack again in the future. We get a sneak peek at Wolfe’s sister and her mate that left me wanting more. For a short story with a lot of heart and some heat to warm these cold nights, pick up a copy of Wolf!

Posted by The Long and the Short of It Admin at 4:00 AM
Email ThisBlogThis!Share to TwitterShare to FacebookShare to Pinterest
Labels: Author A-C, Contemp, Four Cherries, M/F, Paranormal, Short Story, Whispers Publishing

Thank you so much for the review and I'm glad you enjoyed reading Wolf! And you definitely will be seeing a followup with Wolfe's sister in the forefront.