Copping a Feel by Jamieson Wolf 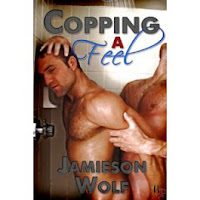 Justin Wright is not lucky in love.

His boyfriend has dumped him. He no longer believes in love at first sight, and he hates Valentine's Day.

Justin may not believe in love, but love believes in him.

What do you do when you’ve given up on love and love just can’t quite get the message?

Read Copping a Feel, that’s what you need to do.

I’m new to the work of Jamieson Wolf, but when I saw the blurb for this short story, I knew I had to nab it. I’m glad I did. The premise of the story is interesting. Justin, a romance author, has given up on love. Ah, but has love given up on him? You’ll have to read more.

The characters are different than I’d expected. There are moments where they are simply aching with need and frustration mixed with scenes of incredible heat. Mr. Wolf certainly writes spicy build-up in his stories.

What I didn’t see coming was the twists and turns in this little tale. When I thought Mr. Wolf would zig, he zagged, making the story that much richer. I would’ve liked to have had this story be a tad longer. The ending felt abrupt and had an unfinished quality to it. More, I wanted into both Wallis and Justin’s head to see what was rolling around. There was so much to work with, especially the paranormal aspect of the story, and with a little more, this work really would have shined.

Justin is a character readers can relate to. We’ve all had those moments in life where we’re certain love just isn’t in the cards. He’s got a definite vulnerability to him. I even rather liked the rougher, jaded edge to him. It made him more realistic. Then there’s Wallis. Talk about a quick meeting. The scene literally drips with tension and desire.

If you want a story that definitely sizzles, you need to read Copping a Feel.